(Based primarily on information from Control of Canine Genetic Diseases by Dr. George A. Padgett)

The following list describes a number of inherited disorders, which are documented as affecting Newfoundland Dogs Some of these conditions are rare in occurrence, others are relatively common. These diseases range in severity from what may be considered cosmetic in nature, to those that are crippling or life-threatening. They are presented in alphabetical order by disease category and not prioritized in any way. Research has indicated that these disorders are genetically transmitted; however, in some instances, the same condition may also have environmental causes, such as trauma, nutrition or other external factors. Unless proven to be otherwise, the causative factor should be considered to be genetics.

The Newfoundland of America extends its most sincere gratitude and appreciation to the Bernese Mountain Dog Club and Robin Camken for developing the original format of the listing below and so graciously allowing us to copy their work. Their dedication to the health of dogs is truly outstanding.

"If people tell you their dogs have never produced a defect, their dogs have probably produced only one litter, they don't follow up on their puppies or what is most likely the case, they are being less than truthful."
-- Dr. George A. Padgett, DVM 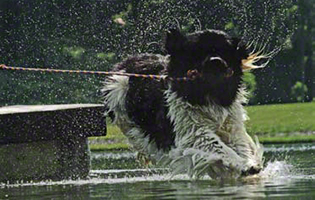 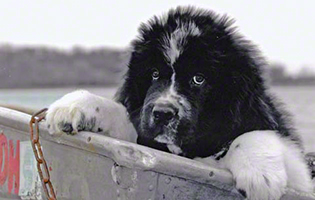 Lymphosarcoma/Lymphoma A cancerous condition involving the lymphatic system. One of the more common canine cancers.

Osteosarcoma A cancer condition involving the bone. The most common bone cancer.

Acute Moist Dermatitis - A hot spot is a superficial skin infection that results when the normal skin bacteria overrun the skin’s defenses as a result of damage to the skin surface.

Atopic Dermatitis - Atopic dermatitis in dogs (allergic dermatitis, canine atopy) is a hypersensitivity or over-reaction to a variety of commonplace and otherwise harmless substances in the environment.

Gastric Dilation-Volvulus- (Bloat and Gastric Torsion) is a rapidly progressive life-threatening condition of dogs. The condition is commonly associated with large meals and causes the stomach to dilate, because of food and gas, and may get to a point where neither may be expelled.

Inflammatory Bowel Disease - Inflammatory bowel disease is one of the most common causes of vomiting and chronic diarrhea in dogs. Immunoproliferative enteropathy, a disease that is related to an abnormally reactive immune system, affects the large or small intestine, the liver, the endocrine system, the kidneys, and the skin.

Addison's Disease - Addison's disease in dogs is also known as hypoadrenocorticism. It is a disease that results from the reduction in corticosteroid secretion from the adrenal gland. The adrenal gland is a small gland located near the kidney that secretes several different substances that help regulate normal body functions.

Cushing's Disease - Cushing's syndrome happens when your dog's body makes too much of a hormone called cortisol. This chemical helps him respond to stress, control his weight, fight infections, and keep his blood sugar levels in check. But too much or too little of it can cause problems.

Hypothyroidism - Most hypothyroid dogs respond readily to treatment with synthetic thyroid medication such as Soloxine. Many dogssuffer from a low thyroid hormone level for years without treatment. If your dog has chronic recurrent skin problems, or unexplained weight gain, she may be suffering from hypothyroidism.

Subaortic Stenosis (SAS) - The aortic valve is located between the main pumping chamber of the heart, or left ventricle, and the aorta. It opens during the pumping phase of the cardiac cycle to allow blood to flow into the aorta. In canine subaortic stenosis, a thick, fibrous ring of tissue is present in the region within the left ventricle just below the aortic valve. This ring forms a narrow channel for blood to be ejected into the aorta, creating an obstruction, which increases the workload of the heart muscle significantly and reduces the amount of blood ejected from the heart. The disease is congenital (present at  birth but the obstruction can become more severe as a dog grows into adulthood).

Cardiomyopathy - Generally speaking, the clinical signs of DCM are a loss of appetite, increased heart rate, pale gums, exercise intolerance, difficulty breathing and fainting. If the left ventricle is affected, the dog may also develop a dry cough.

Immune Mediated Hemolytic Anemia - With primary IMHA, your dog's immune system mistakenly produces antibodies that attack its own red blood cells. This is the most common cause of anemia in dogs. With secondary IMHA, the surface of your dog's red blood cells is modified by an underlying disease process, drug, or toxin.

Myasthenia gravis - Myasthenia Gravis. Myasthenia Gravis is a condition resulting from a deficiency of acetylcholine (ACh) receptors on the postsynaptic membrane resulting in a syndrome of muscle weakness. Both congenital and acquired forms of this condition occur in dogs, cats, and humans.

Thrombocytopenia - Immune-mediated thrombocytopenia (IMT) is a very serious autoimmune disease in which a dog's body attacks its own blood platelets as though they are a pathogenic bacteria or virus. Thrombocytopenia is the technical word for low platelet count.

Epilepsy - A seizure results from excessive electrical activity in the cerebral cortex of the brain. The electrical activity starts in one area (called the seizure focus) and spreads in a process called kindling. Classically, the patient loses consciousness, collapses, becomes stiff at first and then begins paddling or struggling but seizures can take many forms. Any involuntary behavior that occurs abnormally may represent a seizure.

Cataracts- Cataract refers to the cloudiness in the crystalline lens of the eye, varying from complete to partial opacity

Entropion - Entropion is a genetic condition in which a portion of the eyelid is inverted or folded inward. This can cause an eyelash or hair to irritate and scratch the surface of the eye, leading to corneal ulceration or perforation. It can also cause dark-colored scar tissue to build up over the wound (pigmentary keratitis).

Ectropion - Ectropion is a common condition of dogs where the lower eyelids droop or roll out. It can affect one or both eyes. It is often inherited and has a strong tendency to occur in dogs with loose droopy skin. St. Bernards, Great Danes, Bloodhounds, Bullmastiffs, Newfoundlands, among others, are predisposed to ectropion

Cruciate Ligament Rupture - If your dog goes lame in one of his hind legs, he may have torn or ruptured his cranial cruciate ligament, or CCL – similar to the ACL in humans. This ligament connects the back of the femur (the bone above the knee) with the front of the tibia (the bone below the knee).

Elbow Dysplasia - Canine elbow dysplasia (ED) is a disease of the elbows of dogs caused by growth disturbances in the elbow joint. There are a number of theories as to the exact cause of the disease that include defects in cartilage growth, trauma, genetics, exercise, diet and so on.

Hip Dysplasia - In dogs, hip dysplasia is an abnormal formation of the hip socket that, in its more severe form, can eventually cause crippling lameness and painful arthritis of the joints. It is a genetic (polygenic) trait that is affected by environmental factors.

Luxating Patella - Patellar luxation occurs when the dog's kneecap (patella) is dislocated from its normal anatomic position in the groove of the thigh bone (femur). ... A dislocated kneecap is one of the most prevalent knee joint abnormalities in dogs.

Osteochondritis Dissecans (OCD) - Osteochondritis dissecans, commonly known as OCD, is a disease of the cartilage that can affect various joints in a dog. In any joint in the body, two bones come together and movement is allowed between them.

Panosteitis - Panosteitis refers to a short-lived (self-limiting) and painful condition characterized by limping and lameness. It is a condition that affects the long bones in the legs of young dogs, usually between the ages of 5 to 18 months. It can occur with any breed, but it is more common in medium- to large-sized dog breeds.

Cystinuria - Canine Cystinuria is an autosomal recessive disorder that affects a dog's ability to filter cystine out of urine.

Ectopic Ureters - Ectopic ureters are a congenital anomaly of the urinary system, in which the ureteral orifice is inappropriately positioned caudal to the urinary bladder. This is the most common cause of urinary incontinence in juvenile female dogs.