Back when I graduated from The Ohio State University School of Veterinary Medicine (GO BUCKS!) in 1998, the phrase “Never let the sun set on a pyo” was preached often during my four years of study. Pyometras, or a uterus full of pus/infection, was a differential that always had to be on your list for a sick, “not doin-right” intact bitch. During my senior year I looked forward to the opportunity of having a pyometra case, because to me, who wouldn’t want to see a possible big “bag” of pus! 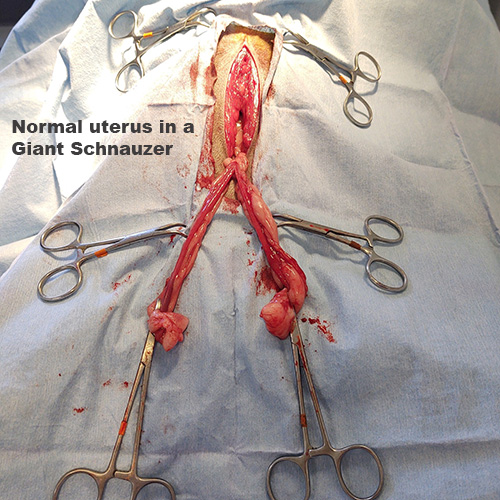 Today, both as a veterinarian and Newfoundland breeder, pyometras are NOT something I look forward to encountering. I often explain to my clients that a pyometra surgery is a “big scary spay on a very sick dog” with the possibility of their bitch dying from a list of complications. Fortunately, my patients have survived the surgery that cured them from this life-threatening disease.

Pyometras usually present in a middle to old aged intact bitch that were in heat up to twelve weeks ago. The breeds most commonly affected (but are not limited to) are Golden Retrievers, Rottweilers, Collies, Bernese Mountain Dogs, Airedales, and Irish Terriers. It has been estimated that by the age of ten years old, 25% of intact females will develop pyometra. Interestingly, pyometras often occur in older bitches that have not had a litter. 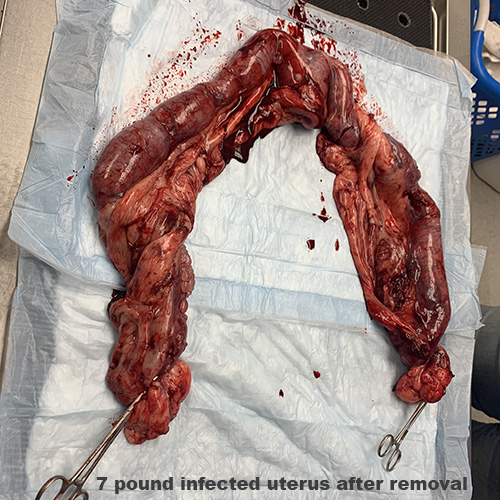 There are two types of pyometras: open or closed. A closed pyometra occurs when the cervix is closed; there is no vaginal discharge. An open pyometra occurs when the cervix is open that allows for people to see the bloody, often smelly, vaginal discharge. The exact cause of pyometras is unknown. Pyometras commonly occur during diestrus (when progesterone is high). E. coli, the most common bacteria associated with pyometras, colonizes in the uterus and cause the infection. During estrus, the bacteria can move from the vagina into the uterus through the open cervix. Pyometras are potentially life threatening because infection can cause sepsis and shock. The risk of uterine infections increases with each additional heat cycle because the hormonal influences on the uterus are additive.

A pyometra should always be considered for a cause of illness in an intact bitch. Sick females can present with a variety of symptoms (beside vaginal discharge) such as: loss of appetite, increased drinking/urinations, vomiting, diarrhea, lethargy, and/or dehydration. A fever does not have to be present. All sick intact bitches should be examined by their veterinarian immediately. A pyometra can be diagnosed via bloodwork, urinalysis, abdominal radiographs, and ultrasound. Ultrasound is the gold standard to diagnose a pyometra.

Treatment for pyometras can be surgical, medical or a combination of both. Neither option is 100% safe and complications exist with each treatment. Both options should be discussed with the bitch’s owner and treatment should be based on how stable the patient is. The main advantage of surgery is that it can eliminate the opportunity for pyometra to reoccur. Surgery is an ideal treatment for non-breeding bitches or for bitches that are done producing litters. Medical therapy should be considered for young to middle aged valuable breeding bitches or initially performed in order to stabilize a patient so that it is a good anesthetic candidate for surgery. In the case of medical management for uterine infections, hospitalization and treatment (consisting of antibiotics, IV fluids, luteolytic treatment) is usually longer than that of surgery and, if medical therapy is unsuccessful, surgery can be performed.

All in all, if a bitch is not intended to be bred, ovariohysterectomy or spay is the best treatment to prevent pyometras. Check with your veterinarian and breeder as to when it is the best time to spay you bitch. If you do have a valuable bitch that you intend on breeding, please record your bitch’s estrus cycles and remember the clinical signs associated with a pyometra in order to be prepared to contact your veterinarian in this emergency situation.